Tacos are unquestionably a staple of Mexican cuisine, and a popular food for people around the world to enjoy. How did it become so global? Where did the taco get its start? In today’s blog, the lovers of healthy Mexican food here at Guac Shop will offer you a deep dive into the history of the taco. Read on to learn more, or stop by our Garden City location to simply enjoy this delicious dish!

What Is a Taco?

First, we should clarify what we’re talking about when we say: taco! This traditional Mexican dish starts with a corn or flour tortilla and comes with a wide variety of possible fillings, including beef, pork, chicken, seafood, and veggies. There are also a lot of toppings to choose from, including salsa, avocado, onions, and more, and as long as you don’t go overboard, you should be able to eat your taco with just your hands! There are clearly a lot of ways to interpret and adapt the taco, which we think is why it has become so popular. That, and the fact that tacos are delicious.

Origins of the Taco

The true origins of the taco are unknown, but there are a few theories out there. One historian believes that tacos started in Mexican silver mines, and that the word “taco” was originally used to describe the paper-wrapped loads of gunpowder they used to excavate the mines.

Another theory gives the taco more indigenous roots. Some believe that “taco” came from the word “tlahco,” which can be translated to “in the middle,” referring to the filling in the middle of a tortilla. Whether the inspiration came from dynamite-like blasts or local linguistics – or both! – we’re just happy the taco was invented.

Tacos became more popular with the movements of Mexican migrants. First, these migrants followed waves of industrialization into new areas looking for work, and women brought regional cooking skills – and the taco – with them. From spreading across the country to following the need for work into the United States, the taco followed these migrants and was often seen as a low-class street food. 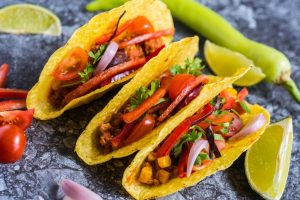 The first mention of tacos in American media appeared around the 1900s as Mexican migrants pursued work in U.S. mines and on railroads. The convenient and customizable dish became popular as a way for other populations in the United States to sample Mexican food and culture. The traditional fillings of Mexico started to adapt to the different types of ingredients more available in our northern country, and hamburger, iceberg lettuce, and tomato became the fillings that most of us are familiar with today.

Hard shell tacos also appeared to have their start in the U.S. The recipe for baked and pre-shaped tortillas started appearing in cookbooks around the 1940s, and it is likely the reason tacos became as widely known – and enjoyed – as they are today. Hard shell tacos made it easier to serve many people faster, and we can’t say we’re ungrateful!

These days, Americans have started looking for freshness, flavor, and authenticity more than convenience. Traditional Mexican staples like tacos de barbacoa and tacos al pastor are entering a new golden age, and healthier ingredients like brown rice and baby spinach are finding their way into your tortilla. Here at the Guac Shop, we take pride in serving tasty tacos made to order, no matter what your preferences are when it comes to fillings or toppings.

Are you hungry yet? Check out our menu to create the taco – or tacos! – of your dreams, and start your Guac Shop order online. We offer a selection of healthy Mexican food, from burrito bowls to salads, so you can fulfill your cravings, and double protein is our standard. Don’t forget to check out our breakfast menu too to enjoy tacos any time of day! We look forward to seeing you.